How Acoustic Screens Can Create Peace & Privacy in Noisy Offices

How Acoustic Screens Can Create Peace & Privacy in Noisy Offices

It’s easy to see why open plan offices have become so popular. The flow of communication is often better when colleagues aren’t separated by walls, and companies can save a considerable amount of money by fitting their whole workforce into one space. But what happens when someone needs peace and quiet for work which demands intense concentration, or a sensitive conversation that they don’t want everyone in the office to overhear? Privacy is precious and often hard to come by in the modern workplace, but there’s a simple solution to the problem of how to create peace and quiet in an open-plan office: acoustic screens.

The Problem of Office Background Sound

There’s plenty of evidence to suggest that there’s a connection between stress and open office noise. According to recent research, more than half of people who work in an office believe they would be more productive in a quieter environment and are concerned that they don’t have enough privacy while they’re working.

When a large number of people are working in one space, without any kind of office sound insulation, it’s almost inevitable that sound will become a problem. While open workplaces have various benefits, such as improving communication and promoting a sense of being part of a team among colleagues, they’re undoubtedly an issue for many people who work in an office. In one of our blog posts, we wrote about how partitions can save your open-plan office. Professionals who spend long periods on tasks which require intense concentration, such as data analysis, often report that office space sounds are a serious issue. Those who spend lots of time on the phone also find noise distracting, particularly if their work is sensitive, and senior members of staff often prefer to work in a quiet, private environment.

Sound dampening panels provide a simple and highly effective solution to the problem of office background noise. Not only do they offer excellent sound reduction, but they’re extremely versatile, too, and can be arranged to create quiet workspaces –  even in the noisiest offices.

What Exactly Are Sound-Proofing Acoustic Panels?

Acoustic wall screens are walls made of sound-absorbent material. They are used in workplaces, particularly open-plan offices, to reduce noise and create private spaces. Although they don’t completely eliminate chatter and other workplace sounds, they reduce office noise significantly and provide the privacy and quiet which many professionals crave in their busy and often crowded working environment.

How do Sound-Absorbing Panels Work?

Acoustic panels are made of sound-absorbent material which traps acoustical energy – otherwise known as sound – and prevents it from travelling any further. Acoustic panels are a highly effective form of soundproofing insulation, with the capacity to reduce office noise significantly. Acoustic sound panels also lessen reverberation and echo, helping to create a calmer atmosphere by limiting the muddling of sounds, which is a common problem in large, open-plan offices. If you want to reduce office white noise, acoustic screens are a fast and effective solution. They come in a range of forms, including foam and fabric-wrapped fibreglass.

Businesses considering soundproofing a room are often surprised by the variety of decorative acoustic sound panels on offer. Various office furniture brands have created office acoustic panels which are remarkably elegant, as well as offering an exceptional level of sound-absorbency. There’s now an impressive range of customisable and versatile noise-masking wall panels on offer, so you can create soundproof spaces in your office without compromising on the appearance of your environment.

In recent years, a number of brands have pioneered new and exciting approaches to office soundproofing. Gaber specialises in soundproof wall panels which are ideal for creating privacy in all kinds of offices. Gaber’s acoustic wall panels add colour and style to the workplace, while providing an excellent level of sound-absorbency. Also known for its creative solutions to workplace noise is Fluffo, a renowned Polish office furniture brand which produces durable, flame-retardant acoustic wall panels. All of Fluffo’s products are made with high-density polyurethane foam with an exterior layer of thick microfibers for an exceptional level of sound-proofing. 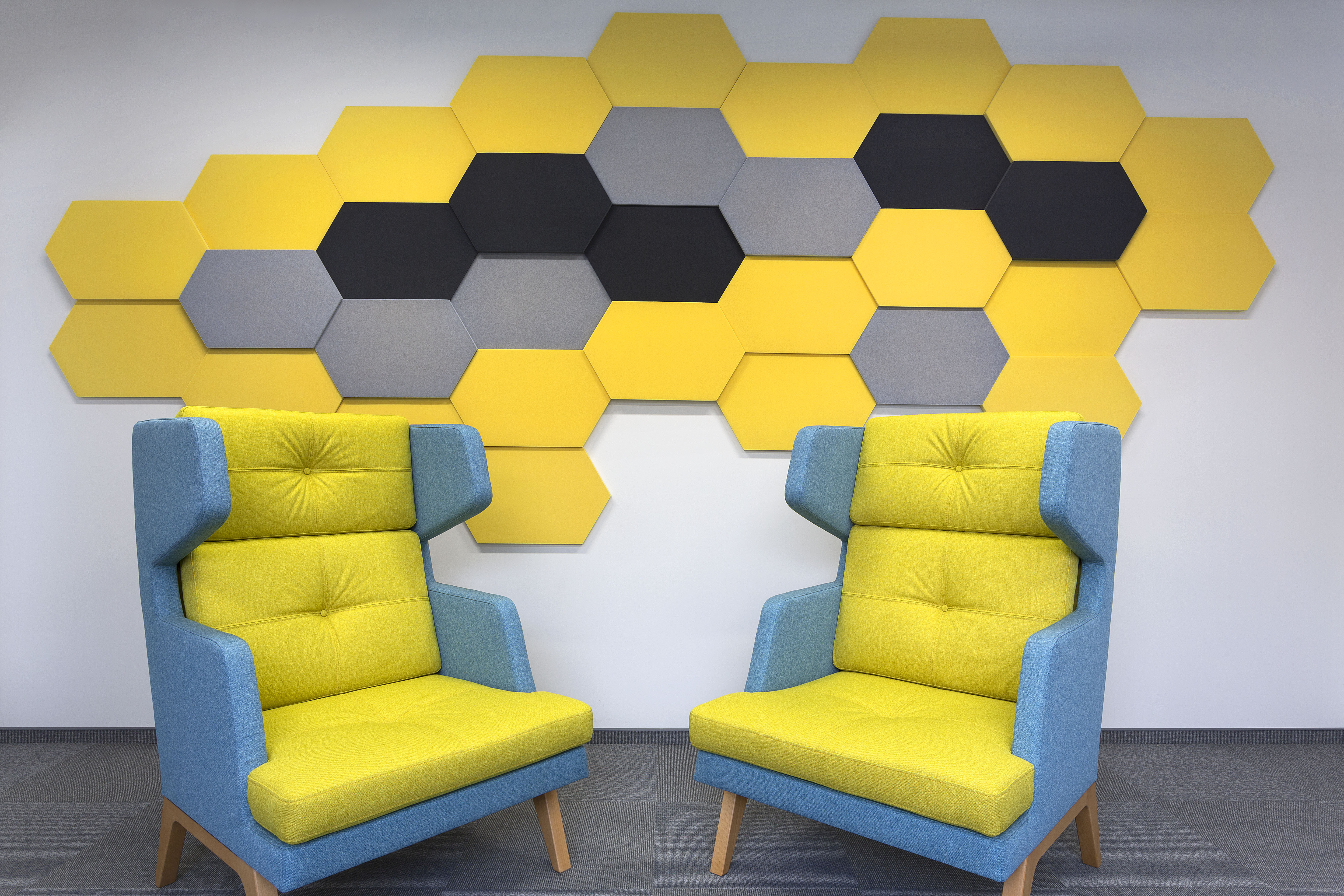 Find the Right White Noise System for Your Office

Acoustic wall panels come in a variety of sizes and shapes, making it easier than ever to create exactly the kind of space you need. Once you’ve measured your workplace and decided on a design, setting up your office acoustic panels is simple. And with with so many professionals reporting that they’re less stressed and more productive when they’re not distracted by noise, it’s no surprise that an increasing number of businesses see acoustic office partitions as a smart investment.

At Radius Office we have a wide range of acoustic panels and designs to choose from. You can check out our Acoustic Screen shop for more information or contact someone from sales who will be more than happy to assist.

About the Author: Eva